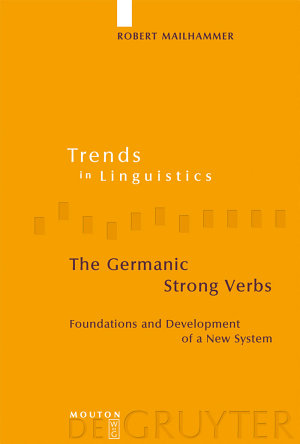 As a contribution to the ongoing discussion of the genesis of the Germanic language, this book investigates the strong verbs of Proto-Germanic using a new approach that combines historical and typological morphology with quantitative etymology. It reveals that the morphological peculiarities and the etymological problems of the strong verbs have been considerably underestimated. The first part of the book explains how drastically the inherited verb system was transformed when it was uniformized and simplified around a functionalized verbal ablaut. In particular, it is shown that the systemic position of ablaut is typologically different from that in the verb morphology of the Indo-European parent language. Moreover, the origin of the lengthened grade preterits and other well-known morphological problems of the strong verbs are discussed. After developing a methodological framework, the second part of the book presents a quantitative analysis of the etymological situation of the strong verbs. It demonstrates that the etymological relations of the strong verbs are significantly less clear than commonly assumed, as almost half of them have no accepted etymology. A comparative quantification of the primary verbs of Sanskrit and Ancient Greek, both of which possess much better etymological connections within the Indo-European language family, underlines the significance of the Germanic data and the validity of the analytical framework. Taken together, the investigations presented in this book put the Germanic strong verbs in a new and markedly different light. Their largely obscure etymological situation in combination with their far-reaching morphological restructuring has telling implications for the prehistory of the Germanic languages and suggests new pathways for future research.