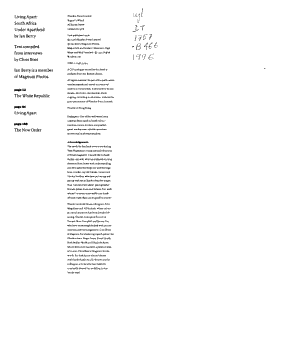 In the postwar period the South African government gradually developed a policy that was meant to retain forever the rights and privileges of a white minority - apartheid. Whereas in many other societies racial prejudices and tensions create difficulties, only in South Africa was segregation institutionalized and regulated, producing bizarre and often absurd situations. This aspect of the South African experience, the duty to "Live Apart" while occupying the same space, has been uniquely recorded by the camera of Ian Berry. Berry first set out for South Africa as a boy of seventeen and thus began a career of recording ordinary lives in extraordinary circumstances. While working as a photojournalist for Drum, the major magazine of the black community, he was present at the Sharpeville riots in 1960 and over the course of the following decades he was to return to South Africa many times and capture many of its most significant moments. In the 1990s the collapse of apartheid and the rise of Mandela have resulted in a remarkable form of reconciliation at the same time as an alarming escalation of urban problems and violence. Once again Berry has been back with his camera, recording the election and its aftermath.