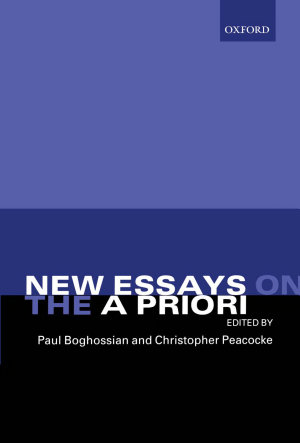 The topics of a priori knowledge and a priori justification have long played a prominent part in epistemology and the theory of meaning. Recently there has been a surge of interest in the proper explication of these notions. These newly commissioned essays, by a distinguished, international group of philosophers, will have a substantial influence on later work in this area. They discuss the relations of the a priori to meaning, justification, definition and ontology; they consider the role of the notion in Leibniz, Kant, Frege and Wittgenstein; and they address its role in recent discussions in the philosophy of mind. Particular attention is also paid to the a priori in logic, science and mathematics. The authors exhibit a wide variety of approaches, some remaining sceptical of the notion itself, some proposing that it receive a non-factualist treatment, and others proposing novel ways of explicating and defending it. The editors' Introduction provides a helpful route into the issues.