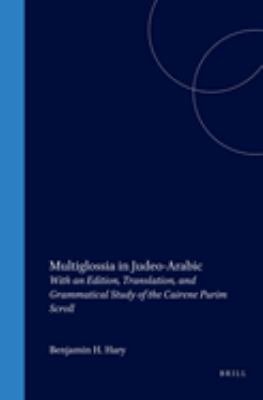 This volume contains a study of multiglossia in Judeo-Arabic in addition to a critical edition, annotated translation, and a cultural and a grammatical study of The Purim Scroll of the Cairene Jewish Community, written in 1524 to commemorate the deliverance of the Jews of Cairo from Ahmad Pasha, the governor of Egypt. 'Multiglossia' is a linguistic state in which different varieties of a language exist side by side in a language community and are used under different circumstances or with various functions. 'Judeo-Arabic' has been written and spoken in various forms by Jews throughout the Arabic-speaking world. For the most part, its literature concerns Jewish topics and is written by Jewish authors for Jewish readers. Part One places the language of the Judeo-Arabic text of the Scroll within the multi-glossic history of Judeo-Arabic. It offers a possible linguistic model that accounts for the mechanisms of Arabic multiglossia and examines its historical development. Part Two introduces the two critical editions of the Scroll, both in Hebrew and Judeo-Arabic, with the variant readings followed by an annotated translation. Part Three presents a detailed grammar of the Scroll using the framework of Judeo-Arabic multiglossia. The significance and the contribution of this book lie in its interdisciplinary nature, drawing on linguistics, philology, and cultural history.