The Arowana is the world's most costly aquarium fish. It is a tropical freshwater fish from the brackish swamps of Asia, the river basins of South America, and the pools and billabongs of Austrailia. There are numerous types of Arowanas, most of which can easily grow up to three feet long. This fish is a savage predator that's been around since the age of the dinosaurs and has remained unchanged, which is why some people call these fish "living fossils." The Arowana is prized for its unique metallic scales; the bristles that bulge from its jaw; and its undulating movements as it swims, which are reminiscent of the paper serpents you might find in a Chinese New Year's parade. In fact, the similarities between the Arowana and the dragon of Chinese lore have given rise to the belief that the fish brings good fortune and success. For all of these reasons, the Arowana has become one of the most coveted aquarium fish in the world. The situation of the Arowana is very unique: nearly extinct in the wild, Arowanas have actually seen an increase in reproduction in recent years as they're bred by the thousands on farms for the aquarium trade. The Arowana's declining population and subsequent resurgence is a direct result of the conservation movement of the last several decades -- but not in the way you might think. In the 1970s, when the international community started to organize around the idea of ensuring imperiled species were protected, the idea was to boycott the exchange of all potentially endangered species, including the Asian Arowana. In those days the Arowana was considered a food fish, and not an especially prized one. Although the interest in Arowanas was relatively minimal at that point, the fish is an apex predator in its ecosystem and a moderate-reproducing species, so it wound up on the list of protected species and was banned from international exchange. This effort at conservation backfired, and spectacularly: once a relatively unpopular food fish, when the Arowana became a restricted species, the interest in it as an aquarium fish spiked. Suddenly, the fish was in high demand as a status symbol, and those in the aquarium trade were eager to breed and raise as many Arowanas as they could for sale. This brings us to where we are today, with certain prized specimens of Arowana being sold for an astonishing $400,000 each What makes this fish so special? We'll discuss the myths, legends, types, costs, and care requirements for the incredibly unique and highly sought-after Arowana.

Authors: Viktor Vagon
Categories:
Most Expensive Fish Top 16 Most Expensive Fish For Aquarium Fishbowl or aquarium treating is technical besides does not feel necessity for to be an expensive hobby - unless you decide to get involved with one of these fish, that is! Some of us enjoy guppies and ghost prawn whilst

Authors: Kyle Faber
Categories:
The Arowana is the world's most costly aquarium fish. It is a tropical freshwater fish from the brackish swamps of Asia, the river basins of South America, and the pools and billabongs of Austrailia. There are numerous types of Arowanas, most of which can easily grow up to three feet

Arowana Fish Most Expensive Aquarium Fish in the World.

Authors: Robert Anthony Anthony
Categories:
Searching for the best quality level for your aquarium? Meet the Asian arowana, the informal Lamborghini of the ocean-and the most costly aquarium fish on the planet. These dragonfish are especially respected in China, where the freshwater pets are superficial points of interest-and cost a chunk of change. In 2009, 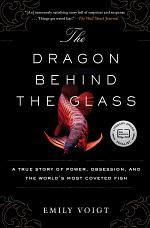 The Dragon Behind the Glass

Authors: Emily Voigt
Categories: Nature
A riveting journey into the bizarre world of the Asian arowana or "dragon fish" the world's most expensive aquarium fish--reveals a surprising history with profound implications for the future of wild animals and human beings alike. The Dragon Behind the Glass tells the story of a fish like none other: